I am fascinated with how systems work and how things are designed. I put myself in observation mode as much as possible. Today I had to head the Motor Vehicle Department (MVD) to get a few automobile titles transferred into my name.

I opened the door to a facility packed full of people. The procedure here is that you stand in line to get a ticket. That ticket is issued to you with a prefix. The prefix is the group that you are assigned to. I was assigned group J, which happens to be for issues involving title changes. As I was standing in line I started to pay attention to how groups were called and in my head I noticed that it felt like each window was taking about 5 minutes to process.

When I received my ticket J616. I realized that there were 18 tickets ahead of me. It was 11:15 am. I quickly did the math 18 tickets * 5 mins = 90 minutes or 1 hour and 30 minutes. I should be done around 12:45 pm. I had a lunch date at noon. I didn’t call to cancel it immediately. I figured I would calculate the cycle time for a few tickets and then figure out the lead time before rearranging my lunch plans.

I pulled out my phone and immediately started a timer. The minute the first J ticket was called I hit “lap”. First cycle time 5 minutes 11 seconds. If I multiplied that by the remaining work 17 items and saw a lead time of 1 hour 28 minutes. I texted my friends and asked if they could give me another 10 minutes to determine if our lunch plans were in jeopardy. Two tickets later and the average cycle time had dropped to 2 minutes 43 seconds and the lead time was 40 minutes. At that point I knew it would be cutting it razor close and so I opted to let them know it wasn’t prudent for me to hold them up and that I would be checking out of lunch. 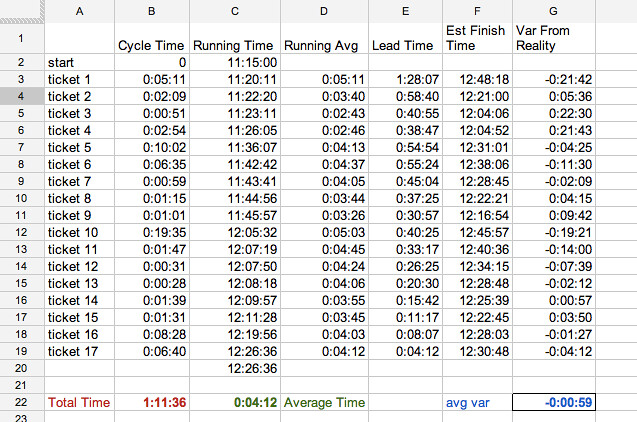 Included above is the full source of data for my time at the MVD. Cycle Time is the amount of time between completed tickets. Running Time is the time of day at the cycle count interval. Running Average is the average cycle time for all tickets completed through that cycle. Lead time is the Average Cycle Time * Work In Progress (Tickets Remaining). Est Finish Time is Running Time (Current Clock Time) + Lead Time. Var From Reality is how much variance there was between that estimated time and the actual time completed. You can see how calculating lead time using a cycle count can be used to predict completion time.

Some things I found fascinating. The average variance against actual was 59 seconds. The variance was never greater than 23 minutes. My original estimates of 5 minute cycles wasn’t too far off from the 4 minute 12 second actual and the estimate of 1 hour 30 minutes was over stated as the actual was only 1 hour 11 minutes.

I know people tend to hate estimating, but I think it is because they are poor observers and can’t see the system as a whole in play. Additionally, it only took me about 5 minutes to come up with the estimate and about 5 minutes to capture data and reconfigure my estimate based on reality. What are some of your experiences playing with data to make predictions?